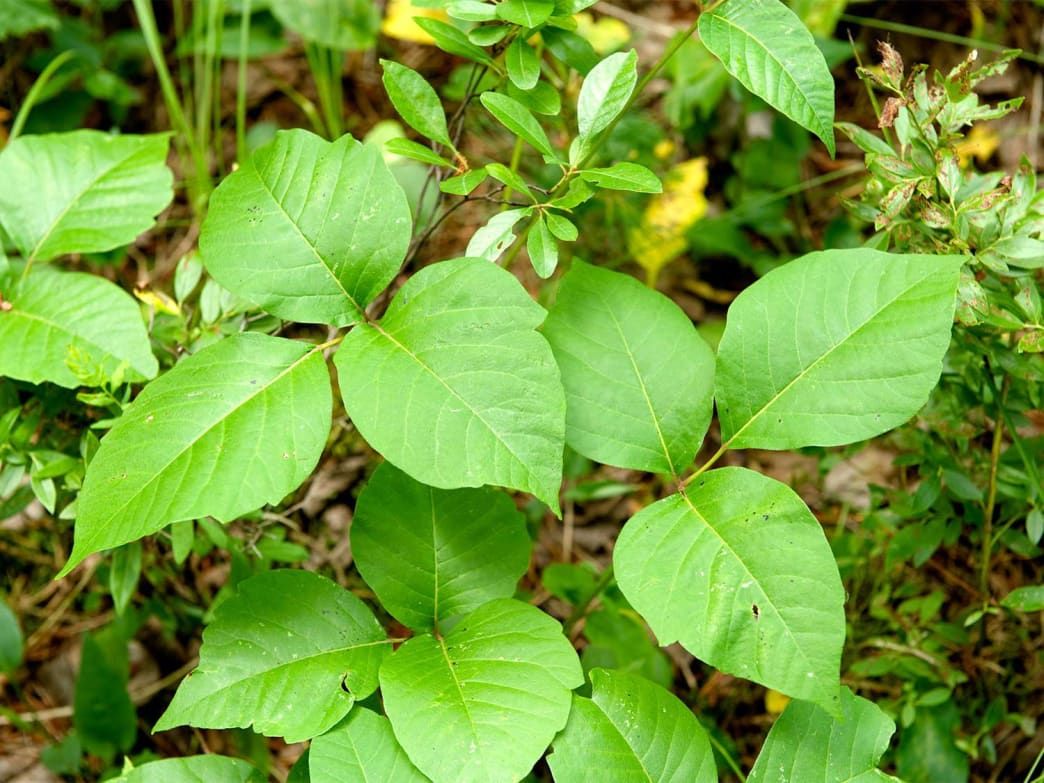 Plants are not out to harm you. On the other hand, they don’t seem to mind if they do. Even the most harmless shrub won’t go out of its way to prevent you from scratching or bleeding or, in rare cases, dying from respiratory paralysis. And some plants, including all 10 of the ones listed here, are well equipped to make your life miserable, or worse, if you mess with them. You can learn all about this by donning a Speedo and racing through thick underbrush. Or you can just read on.

You’d think by now, after so many millennia of scratching, that outdoorsy people would have figured out how to steer clear of poison ivy. Nope. The problem is that the plant itself is something of a shape-shifter: It can be a trailing vine, a climbing vine, or an erect shrub. The leaves may be uniform or slightly notched. They can be hairless or slightly hairy, glossy or dull, toothless or saw-toothed. They can be the size of small oysters or, especially when the vine climbs up a tree, the size of dinner plates. That said, the leaves always come in groups of three, which is why the best thing to keep in mind about poison ivy is probably the first thing you were ever told about it: Leaves of three, let it be. The active ingredient is urushiol. Get the oil on your skin, and you’ve got somewhere between 3 minutes and an hour to wash it off before an allergic reaction sets in. Some people say you need soap, but I’ve washed in streams immediately after contact and not had a reaction. Fun fact: A quarter-ounce of urushiol is enough to give every person on earth (population 7.53 billion) a rash. 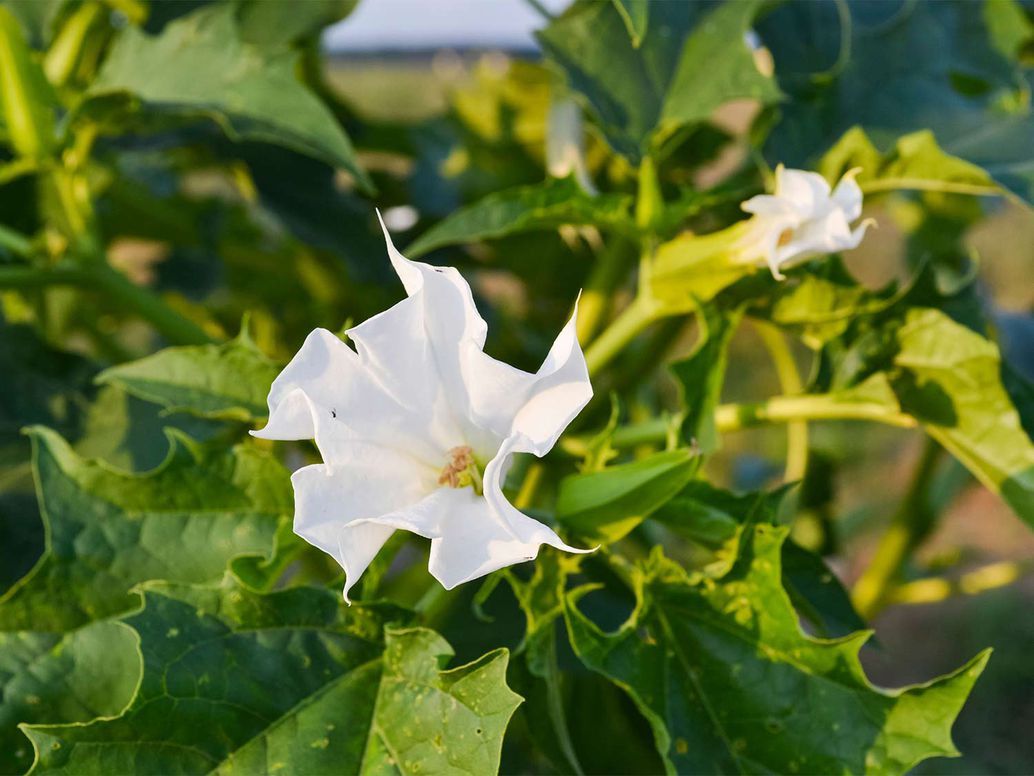 This annual herb grows up to 5 feet tall, with a pale-green stem, spreading purple branches, and dark-green leaves. Its big, showy flowers are creamy white to violet or even purple and have a lemony scent. The rest of the plant smells awful and is extremely rank. It also produces a spiky walnut-size seed pod that’s hard to miss. All parts are poisonous, and toxicity varies highly from one plant to another. Jimson weed can kill you. In addition to hallucinations and delirium, it can induce tachycardia (an abnormal speeding up of the heart rate) or hyperthermia (where your body loses its ability to self-regulate temperature and actually absorbs heat). The name is a corruption of “Jamestown weed,” so named because it incapacitated British soldiers sent to quell Bacon’s Rebellion in 1676. The men were hallucinating for 11 days, during which they kissed each other and grinned “like monkeys.” They got off easy. 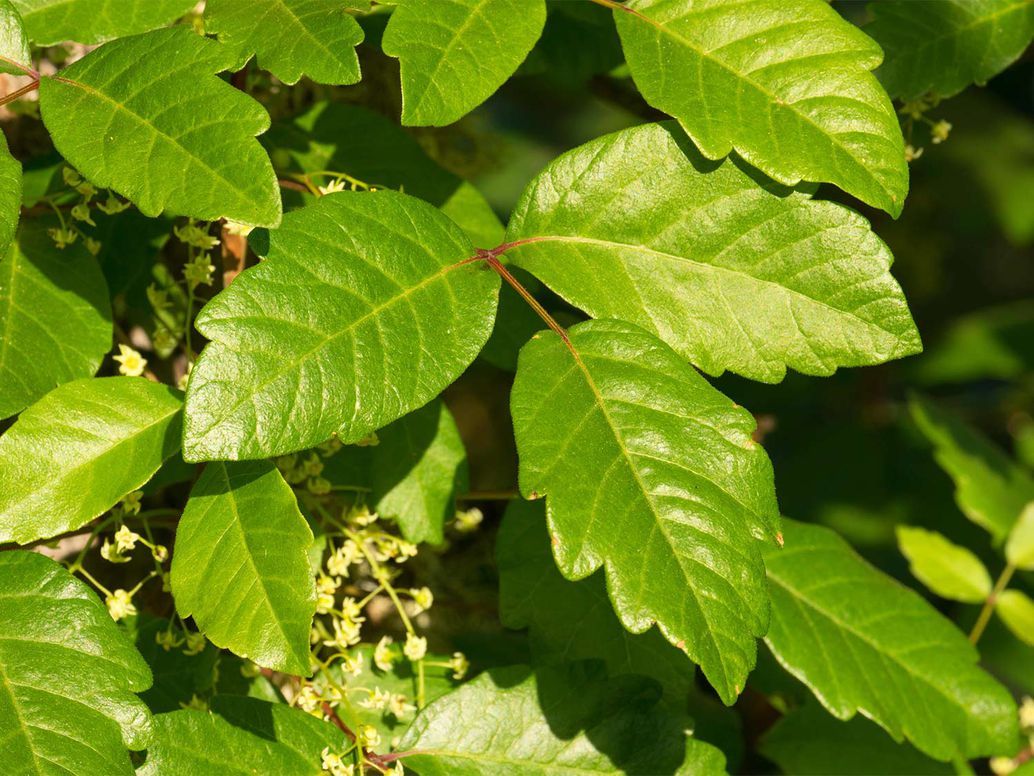 Poison oak differs from poison ivy in that it always grows erect and has hairy leaflets that are almost invariably lobed, like the leaf on an oak tree. I’m not sure whether I’ve never seen poison oak or whether some of the plants I’ve identified as poison ivy are actually poison oak. Probably the latter, given that the two form a whole range of hybrids. Poison oak is said to be more common in the West, and some sources say that it can have up to seven leaflets. But it typically has three and in pretty much every other way it is like poison ivy; it exists throughout the continental U.S. in one form or another and it, too, gets you with urushiol. Some people believe they’re “immune” to the oil, meaning they don’t get contact dermatitis. But that so-called immunity can vanish at any time. And frequently does. 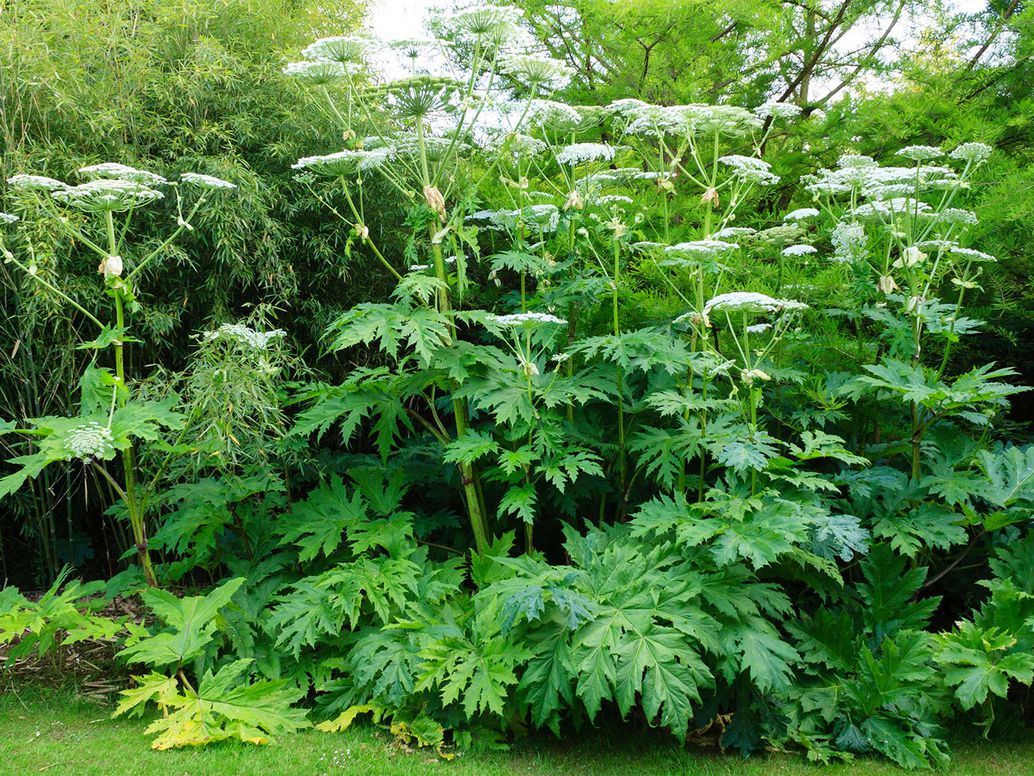 You’re an outdoorsy type, so you probably know what cow parsnip or Queen Anne’s lace looks like. Well, if you see what looks like a mongo version of either, stay away. Also known as cartwheel-flower, hogsbane, and (not surprisingly) giant cow parsnip, this noxious weed grows to 16 feet and produces leaves that may be 4 feet across. The sap is phototoxic, which means it makes your skin hazardously sensitive to sunlight. The good news is that it takes more than simple contact to be affected; you need to crush the plant to produce sap. The bad news is that the reaction is so much worse than a sunburn that it doesn’t seem like the two conditions are related. A giant hogweed rash is more like a severe burn, and the inflammation that may erupt in as little as 15 minutes can result in bad blisters and scars. Giant hogweed was introduced in the U.S. in the early 20th century as an ornamental noted for—you guessed it—it’s great size. It was later naturalized and is found in wet soil in open areas in the Northwest, Upper Midwest, Northeast, and Virginia. 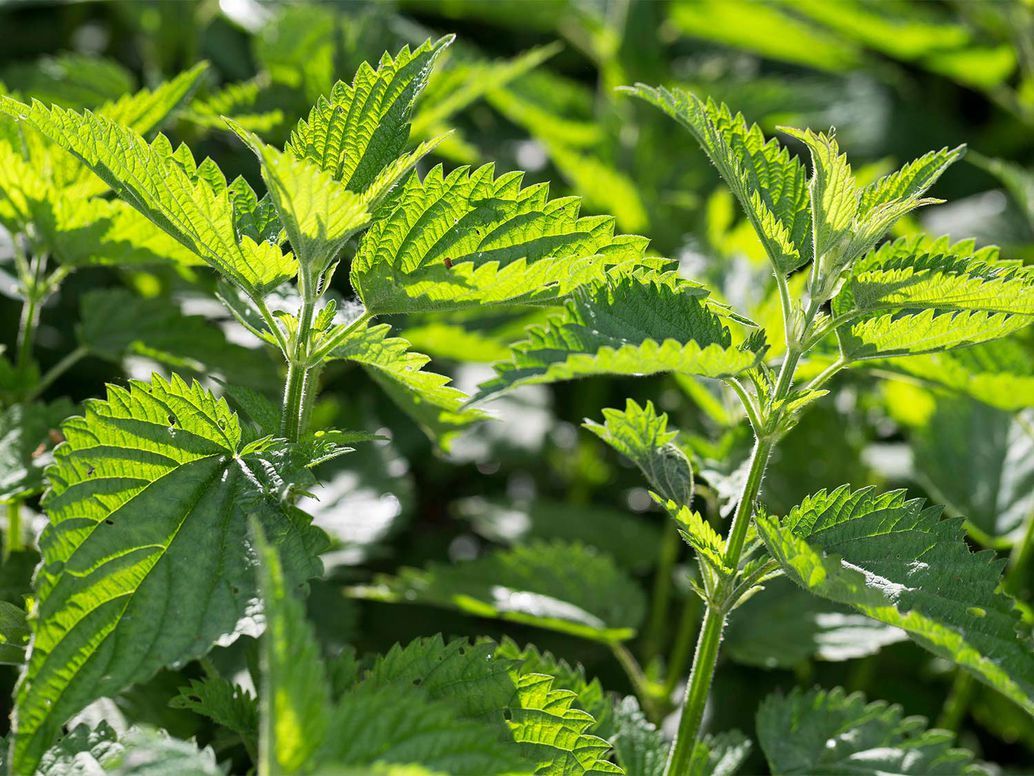 This is an herbaceous perennial plant that looks a little like mint, except it’s taller, doesn’t taste minty, and will sting the hell out of you. One key identifying characteristic—and a hint that it will sting the hell out of you—is a protrusion of small, spiky hairs on the stem and leaves, which can transmit a cocktail of nasty chemicals. The pain from bare skin brushing up against stinging nettle (aka burn nettle, burn weed, or burn hazel) is almost instantaneous and can feel like getting stung by a bee, or multiple bees. The good news is that the sensation generally subsides within a few hours and the rash within 24 hours. Stinging nettle, which grows 3 to 7 feet tall with 1- to 6-inch-long leaves, is actually a healthy and widely consumed vegetable. Boiling the leaves even for a few seconds renders the plant safe. The boiled leaves—add a little salt and butter—are incredibly nutritious, although the texture is a bit like burlap. Stinging nettle is thought to have anti-inflammatory and circulatory benefits and has long been a common ingredient in folk remedies. Roman soldiers dispatched to Britain applied the green leaves to their legs, either to promote circulation in the cold or as a way to stay awake while on guard duty. Since the penalty for falling asleep on guard duty in the Roman army was death, stinging nettles might have seemed like a good alternative. 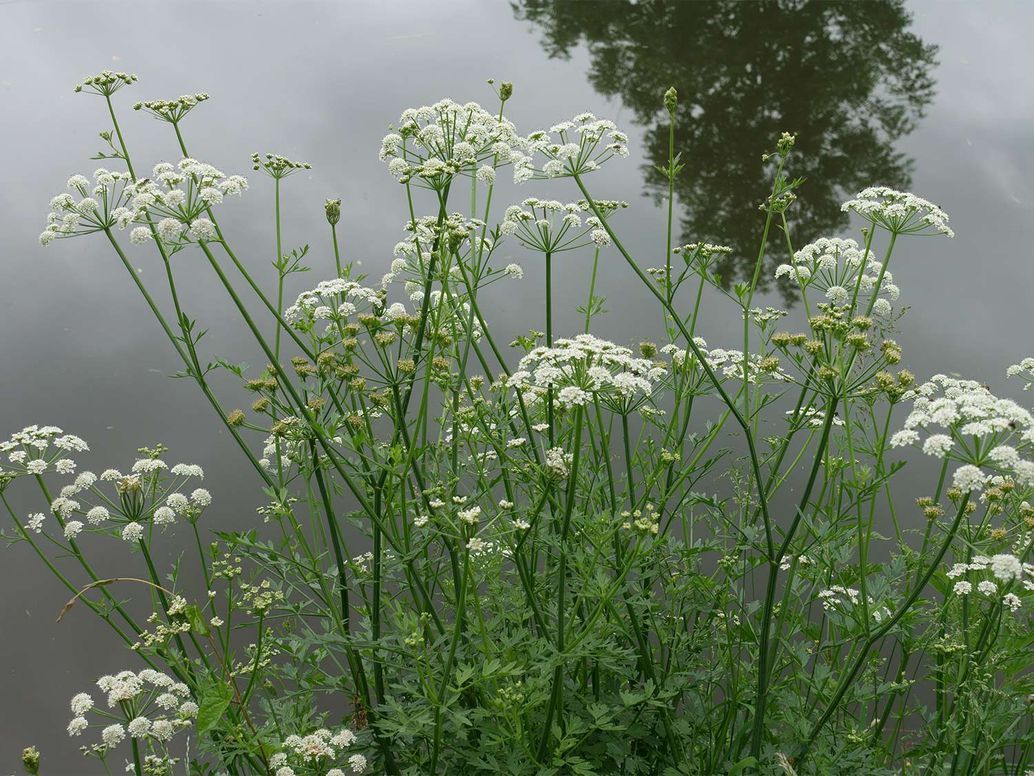 This is what the Greeks went with to whack Socrates, or so the story goes. “Water Hemlock” is an umbrella term that refers to four species of highly poisonous plants that are variously called western water hemlock, northern water hemlock, spotted cowbane, and spotted parsley. All are flowering plants found throughout the U.S. that grow up to 10 feet tall and have pretty white flowers. The most reliable identifying feature is its hairless, hollow stalk, which is almost always marked by reddish-purple splotches or streaks. There isn’t space here for a full tutorial on identification, but be aware that poison hemlock is often mistaken for desirable wild plants like Queen Anne’s lace (wild carrot), yarrow, wild fennel, and elderflower. All parts of the plant—flowers, leaves, stems, roots, and seeds—are highly poisonous. Victims typically die of respiratory paralysis within a few hours of ingesting. Even brushing up against poisonous hemlock causes severe skin reactions. 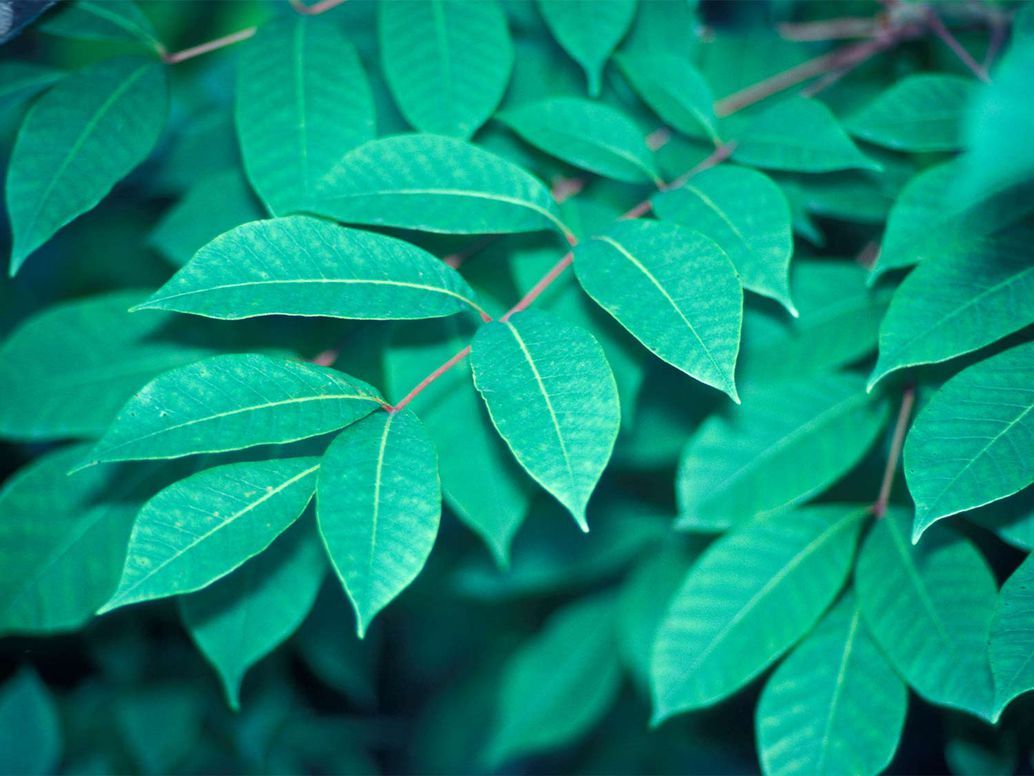 When most of us think of sumac, we are thinking of staghorn sumac—the stuff that grows along the roadside with the spreading spearhead-shaped leaves and fuzzy, red, cone-shaped flower. Poison sumac often grows near staghorn, but it’s easy to tell one from the other. First, poison sumac grows almost exclusively in swamps or very moist soil, and only in the East. If you’re hunting the uplands in, say, South Dakota, the sumac you’re looking at isn’t poisonous. Second, whereas staghorn has a fuzzy stem and pointed, toothy leaves, the nasty stuff has a non-fuzzy stem and smooth leaves that are typically more rounded. It also has greenish-yellow flowers and white or pale-yellow berries. It contains our old friend urushiol, but in a more potent form than poison ivy or oak, so beware. Some botanists call poison sumac the most toxic plant going. Avoid at all times, including when the plant is dead. It’s dead like a rattlesnake is dead. 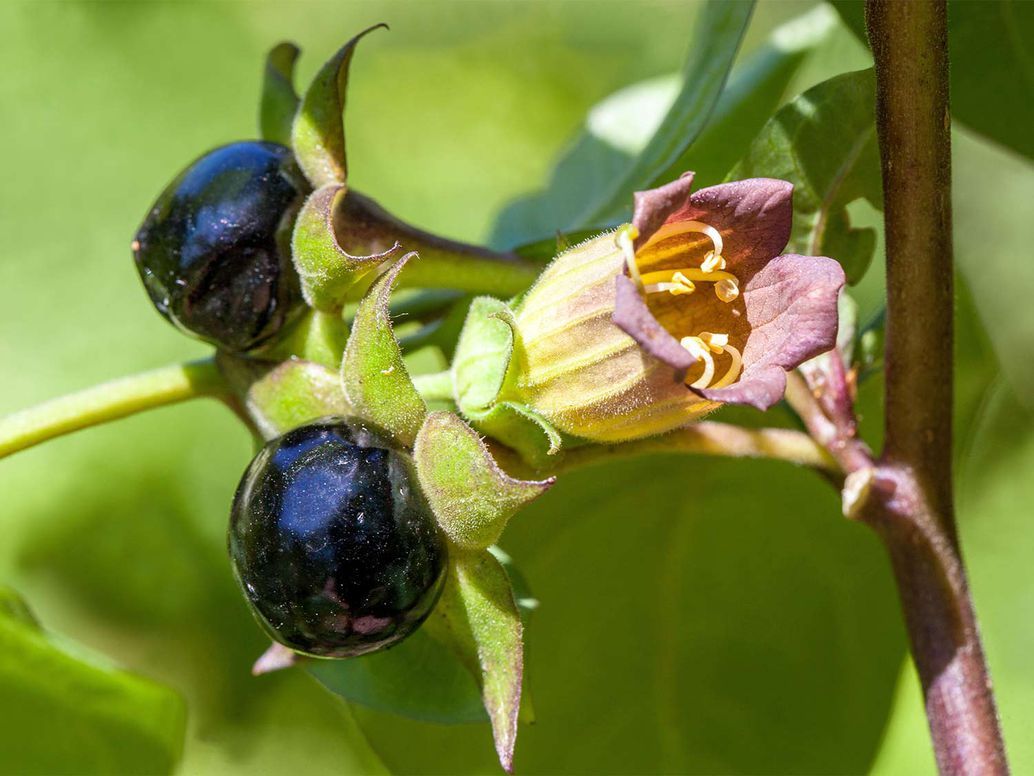 Also called Belladonna, with fruit known as devil’s berries or death cherries, this is one of the most toxic plants in the western hemisphere. Native to Europe, Africa, and Asia, and naturalized in Washington, Oregon, California, Michigan, New York, and New Jersey, deadly nightshade is a bushy perennial that grows to 6 feet, has pale-green oval leaves, bears purple flowers in groups of three, and produces dark purple berries. Both the leaves and the fruit pack serious poison. The plant poses a particular risk to children, who are drawn to the slightly sweet berries and have been known to die from eating as few as two. Though not as deadly, bitter or bittersweet, nightshade—which is an invasive vine and much more common—produces red berries in clusters, and will make you plenty sick in its own right. 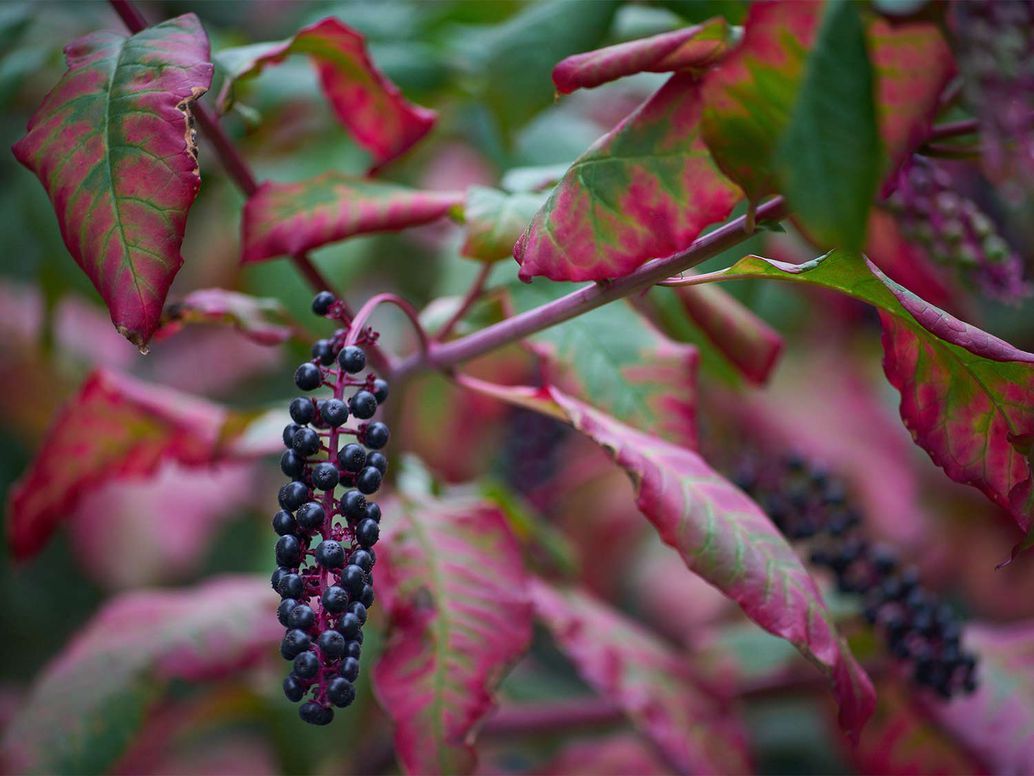 You’ve seen this common—and in places almost ubiquitous—perennial weed growing up to 8 feet tall along pastures, clearings, fencelines, and roadsides. Its stout green to reddish-purple stems support a canopy of large, green leaves and grape-like clusters of dangling berries that start out green and turn dark purple. Every part of the plant is, or can be, poisonous, especially the white taproot. That said, the young shoots—the ones not streaked with red or purple but nearly white, up to, say, 8 inches—make a tasty vegetable after being boiled in at least two changes of water until tender. Every house I’ve ever lived in had pokeweed growing within 100 yards. I’ve fed it to my mother, who likened the taste to wild asparagus. But generally, you don’t want to mess with it, as it can cause sever gastric destress, and worse. Pokeweed killed a fair number of Americans in the 19th century, when it was a somewhat common ingredient in tinctures used to treat arthritis. 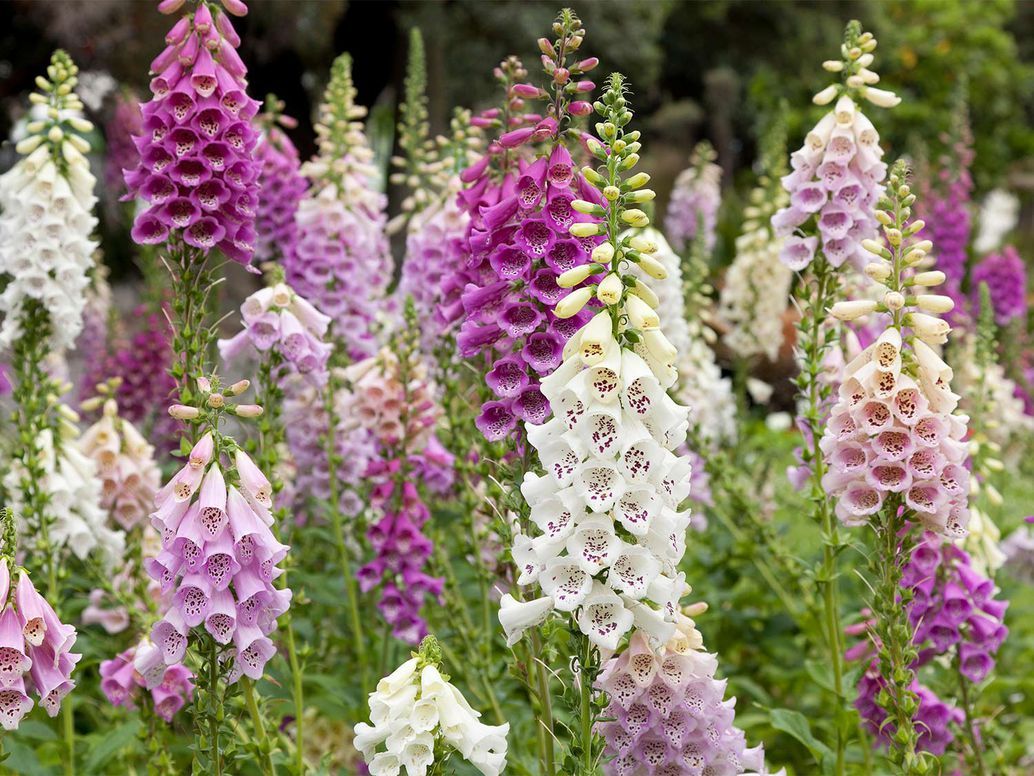 Foxglove’s common names—dead man’s bells, witches glove, and bloody finger—should be a pretty good tip-off that you don’t want to mess with it. Foxglove is a non-native, short-lived perennial that grows to 7 feet and puts out bell-like flowers in its second year. The flowers are usually purple, although cultivated varieties may be yellow, pink, or white. Beloved by gardeners for its good looks and hardiness, it has become naturalized throughout the U.S., especially along roads, rocky outcroppings, and in gardens, including in schoolyards. And every bit of it—seeds, flowers, stems—can kill you if ingested. Foxglove is the source of a powerful steroid used to produce Digitalis and other drugs that treat heart failure. The right dose can restart a stalled ticker if given in time. The wrong dose—and the difference with foxglove is razor-thin—kills you. Consuming any part of the plant usually leads to nausea, dizziness, vomiting, and diarrhea. In lethal cases, victims experience convulsions and cardiac arrest. Gardens are lovely, but don’t let one kill you.

Written by Bill Heavey for Field & Stream and legally licensed through the Matcha publisher network. Please direct all licensing questions to legal@getmatcha.com.