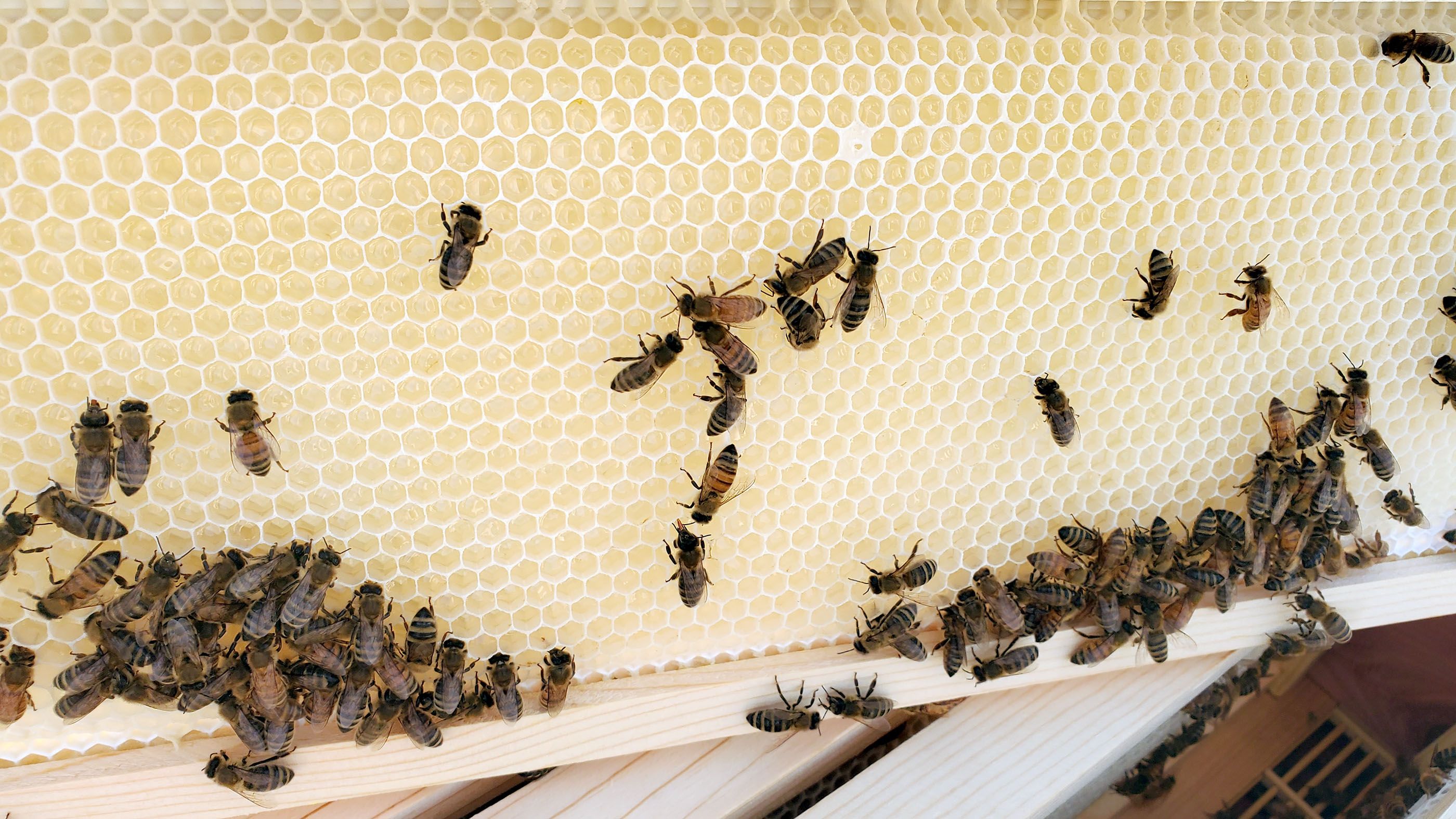 My name is Bryon Western, I’m a Hardware Engineer at Rachio, and World Bee Day on May 20th marks 3 weeks exactly since I officially became a beekeeper. At this point, I’m just happy I haven’t dropped a frame due to a bee walking on my hand. The best things I have done for the bees is mostly leave them alone to let them get established in their new hives, given them enough space to grow as a colony, and given them rockin’ queen-themed names: The House of Mercury, The House of Latifah, and The House of Paul.

It is still early, but it looks like I will be rewarded for my efforts. In my second hive inspection, all three colonies are growing quickly, I visually located the queen for each hive, and this frame of freshly drawn honeycomb is absolutely gorgeous. There are 9 more just like it in a single hive after 1 week of good weather and strong pollen.

Surprising facts from a beginner beekeeper

I started gathering bee knowledge months ago, and many of the bee facts I’ve learned are interesting, surprising, and sometimes silly.

It's totally cool and even highly encouraged to occasionally roll your bees around in powdered sugar.

Since the 1980’s the Varroa mite has been the most detrimental pest to hives in the United States. This red, grain-of-rice sized mite was introduced from Asia and has since become endemic. Controlling the Varroa mite numbers is necessary for every beekeeper, and control starts with counting.

To sample the number of mites in a colony, a half-cup of bees is scooped from the hive into a jar with two tablespoons of powdered sugar. With a screened lid on top, the jar is rolled to thoroughly coat the bees. The powdered sugar causes some mites to disconnect from the bees, and when the jar is turned upside down, the mites fall through the screen into a waiting water bowl. If the mite count is above a certain threshold (usually 2-3 mites per hundred bees), treatment is required. Bonus trivia: ½ cup fits 400 bees.

The sugar coated bees are returned to the hive where they are enthusiastically licked clean by their friends.

Read more about how to support pollinators in your yard

“Bee space” is defined as ⅜ of an inch. In the late 1800’s, an American beeper name L.L, Langstroth discover that spaces in a hive greater than ⅜” get filled with comb, and spaces smaller than that get filled with propolis, at type of bee glue used to hold the hive together and prevent drafts. The fact bees adhere to the ⅜” bee space instead of 9 or 10mm is made even more surprising because the most common types of honey bees in the United States are Italian and Russian, both of whom generally use metric units.

Ok, this might be obvious to most people, but from a beginner beekeeper’s perspective, and after having mentally prepared over several months by reading, taking classes, and watching videos, I thought I was ready. When the lid came off the nucleus for the first time and I heard the buzzing up close, I immediately replaced the lid. I admit, I may have had to talk myself back into the fact that it should be fine to grab those frames with my bare hands. Beekeepers do have the option of wearing gloves, but using them makes it a more clumsy experience where the bees are jostled and squished more often (and injuries abound). Most beekeepers go gloveless for this reason, and so I was determined to do the same.

The crazy thing is, 10,000 bees is really a pretty small number of bees. It is the normal amount in nucleus, which is just a small starter hive with 5 frames. At peak honey flow time, a hive will have over 50,000 bees. Check out this short video to hear what 10,000 bees sounds like.

Where’s Waldo was not a waste of time.

One of the most important activities when inspecting a bee hive is to find direct or indirect evidence that a queen is present and healthy. This can be done indirectly by looking for freshly placed eggs, but direct observation is the gold standard. Finding the queen is like playing a game of Where’s Waldo, except everyone is dressed up as smaller or fatter versions of Waldo. The queen is the longest bee in the hive, but the male drones are the fattest. So when you first start looking for the queen, the fat drones that make up about 10% of the hive continuously draw your eye. When the queen is finally located, there is no doubt; the queen’s body is considerably longer and the wings much shorter than her male counterparts. I was happy and proud when I successfully located the queen in each of my three hives.

Many beekeepers mark the queen with a high visibility marker to make her easier to find. There is even an internationally accepted color code for marking the queen in order to keep track of what year the queen was introduced to the hive. The marking will also help determine when your hive has replaced a queen.

Interested in exploring the world of beekeeping? Take these tips from a fellow beginning beekeeper!

POSTED AT | BY BRYON WESTERN